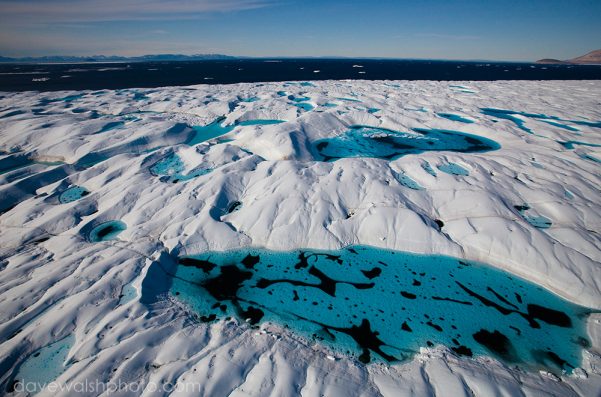 Here’s a photo I made from a Greenpeace helicopter over Petermann Glacier in remote Northwestern Greenland in 2009 during a Greenpeace campaign to look at how climate change was affecting Greenland’s outlet glaciers, before the infamous Copenhagen climate meeting. Those are meltpools on the floating tongue of the Glacier, and the black blobs are cryoconite, deposits of rock, soil, soot, and other matter that collects on ice, then melts its way down. The 80km long, 20km wide floating tongue of Petermann Glacier currently accounts for about 10% of the output of ice from Greenland’s Ice Cap.

Recently this picture ended up being used by National Geographic Traveller – in an article about travelling to Greenland. However, it’s extremely unlikely that even the most-pocketed, resourceful traveller to Greenland would have the chance to stop by Petermann Glacier during their trip. It’s 400km north of the most northerly village in Greenland, Qaanaaq – and Qaanaaq itself is extremely remote, even by Greenland’s standards, getting a couple of Air Greenland flights stopping by twice a week. Still, if you want to go, good luck to you!