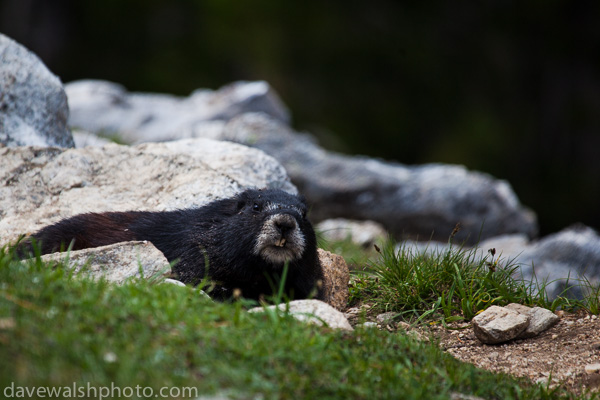 Mellow the Black Marmot, near Surprise Lake, 3000m up in Grand Teton National Park, Wyoming. This rather large marmot certainly was a surprise. When we first spotted this black furry creature, stretched out on some rocks, I thought, what the hell, is this a baby black bear? A wolverine?

Marmots, you see, particularly the yellow-bellied species found here, usually have a brown coat, a white patch between the eyes, a reddish-brown tail, and of course, a yellow belly. What I didn’t know, until I got back to an internet connection is that there’s a bunch of black (melanistic, or black phase marmots) hiding out in Grand Teton National Park. Marmots are usually shy animals, often with one sentinel posted as a lookout in the rocks and boulders they like to inhabit. This guard usually alerts the others with a whistle. Not this marmot. For several minutes he yawned, scratched, dozed, woke up, stared at us, dozed off again. The cycle was repeated several times, without the marmot budging from its position. We named him, or her, Mellow, as she was clearly not shy, or really bothered about anything other than dozing in the sun. 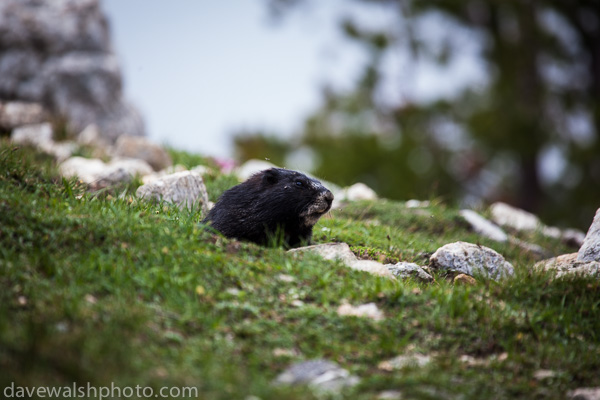 Here’s another fun marmot – my friends and colleagues at Greenpeace USA were recently doing a time lapse movie of Glacier National Parking, in Montana, when they were photobombed by this unruly character: