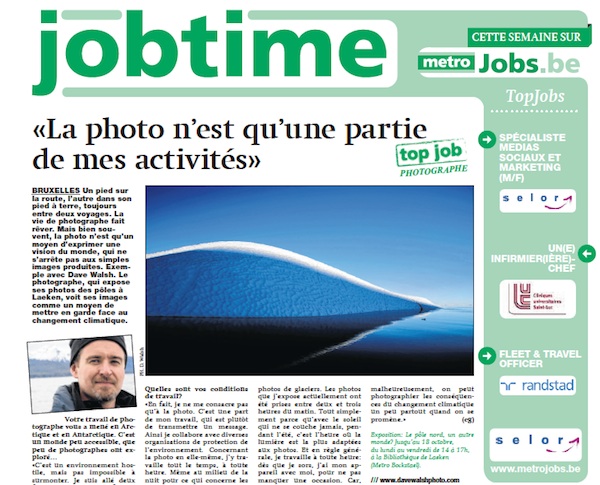 The Arctic: Another World?, a solo exhibition of my polar photography, during October 20213 Bibliothèque de Laeken in Brussels, presented by Greenpeace Belgium and the Ville de Bruxelles. To coincide with the show, journalist Camille Goret Interviewed me for the French edition of Metro Bruxelles.

” The picture is only part my activities ”

Your have photographed and worked in the Arctic and Antarctica. I’s an inaccessible world, few photographers have explored …

“It’s a hostile environment, but not impossible to overcome. I went twice to the Arctic, twice to Antarctica, as part of campaigns with the NGO Greenpeace. The objective was to look the evolution of the [sea and glacier] ice, which is changing at an alarming rate because of global warming.”

Your job as a photographer is a work commitment ?

“Absolutely. I see the photograph as a means to convey a message. I hope my work will help everyone to understand that their actions, our actions, have consequences. So I want to show the beauty of icebergs and ice. But not only this – I also want people to feel some discomfort before the images of this environment that human activity destroyed. ”

What is your way of working?
“I do not devote myself only to photography. It is just part of my work, which is a way of conveying a message. I work with various conservation and environmental organizations on communicating their message. Concerning the photography itself , I’m working all the time, any hour of the day. Even in the midst of [Arctic] night I canmake pictures of glaciers. The photos I am currently exhibiting were taken at perhaps two to three the morning, simply because with the sun which never sets during Summer is the time when the light is the most appropriate the pictures. And generally I work all the time: when I go out, I have my camera with me, so as not to miss an opportunity. Unfortunately, you can photograph consequences [or causes] of climate change just when walking around a [city].

Read the article (in French) in Metro
The Arctic: Another World? opens to public in Brussels
Arctic Nocturne: An evening in solidarity with the Greenpeace Arctic 30