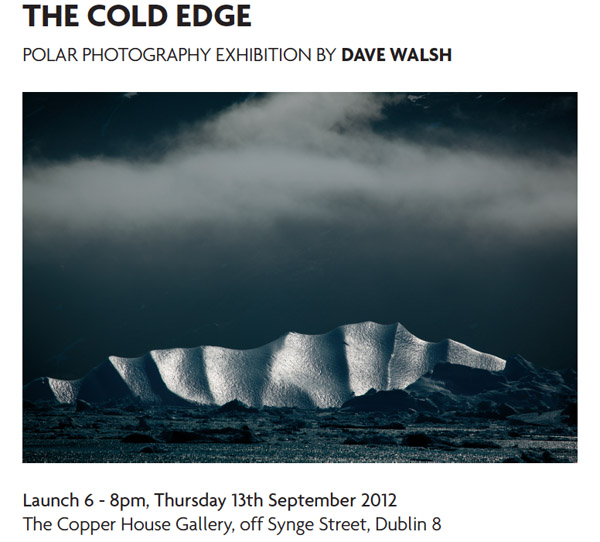 Blog from the Cold Edge launch

There comes a time in a photographer’s life when (s)he finally gets to announce the Big News; a first major solo exhibition. It’s unnerving, exciting, heartening, and reassuring. There’s also the sense of achievement, and a feeling of “yes, I was right to hammer away so for many years on something I care passionately about”. And so, many, many thanks to Leszek Wolnik, at The Copper House Gallery in Dublin who has invited me to show my work on September 13th, 2012.

The Cold Edge exhibition comprises of 16 images from a wider collection, drawn from my many trips beyond the Arctic and Antarctic circles. I think they give a sense of uncertain beauty, fragile, yet fierce, a liminal zone where we have to face the fear of straying further – in space, but also in a metaphoric sense. But rather than scare people away from the polar regions, I want people to embrace them – not necessarily to travel there,but to embrace them as integral part of life on our planet, rather than somewhere infinitely exotic, or something simply watched on TV.

The show opens at 6:00, at The Copper House Gallery. You can RSVP via my Facebook page, and here’s directions to the gallery, which is close to Dublin’s Camden St. My friend, poet Duncan Cleary will introduce the exhibition, and I’m sure it’ll be a wild evening.

Limited edition prints of all the images are available – contact The Copper House Gallery for more details.

Here’s the press release from The Copper House:

The Copper House Gallery presents The Cold Edge, an exhibition of stunning polar images by photographer, writer and environmentalist Dave Walsh, at 6pm on Thursday 13th September 2012. Walsh’s ethereal photographs of the unforgiving wilderness, wild animals and blue icebergs question our romantic relationship with remote, harsh and pristine environments. The images resonate with a quiet tension; all may not be right in the Garden of Eden.

“While the frozen regions of our planet have the power to ignite imaginations, for most of the seven billion people on Earth, the Arctic and Antarctic remain abstract and unreachable”, says Walsh. “ I’ve been lucky enough to voyage north and south by ship, to experience the serenity of the oceans and polar regions – and realise how finite our planet is.”

“Rapid change is taking place at the poles; CO2 emissions are contributing to the loss of Arctic sea ice, and melting ice caps are fueling sea level rise. We are starting to grasp how badly we are fouling the nest, and how our acts have repercussions elsewhere. The future of the Arctic and Antarctic is intertwined with our own – through my photography, I want to make people not only fall in love with their home planet, but to start giving a damn and take action to protect it.”

Originally from Wexford in Ireland’s south east corner, Walsh has voyaged to Greenland, Svalbard (“Cold Edge” in Old Norse) and the Southern Ocean, serving as writer and press officer on board several Greenpeace ship expeditions. Currently based in Brussels, he works with the International Polar Foundation, which promotes action on climate change, energy use, and the crucial role of polar scientific research. Walsh’s photographs have been used by the Irish Labour party, The Financial Times, the HBO comedy series Flight of the Conchords, Greenpeace International, New Scientist, The Smithsonian, Sierra magazine, BBC Wildlife magazine, I Count – Stop Climate Chaos, The UK’s National Theatre, and many others.

He is the author of dozens of articles, online, in newspapers and magazines and has published two books: Haunted Dublin, the co-authored A Load of Blather. Dave is currently working on a book of polar photography, also named The Cold Edge.

Exhibitions include Parallel Worlds at The Factory, Sligo (Solo, 2007), Stand up for Photojournalism National Union of Journalists (touring UK 2009), Environmental Photographer of the Year 2009 (touring UK and Ireland in 2009/2010). Dave Walsh received a commendation at the 2009 Environmental Photographer of the Year awards, and was shortlisted for the Extreme Environment Photographic Competition 2011, at the Tasmanian Museum and Art Gallery.

The Cold Edge, an exhibition by Dave Walsh, runs at The Copper House Gallery from 13th September – 2nd October 2012. Admission is free and all are welcome.