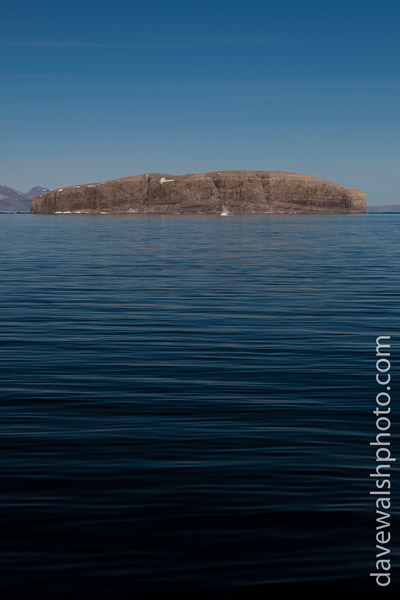 Our ship approaches a smooth dome of barren rock, worn clean by several millennia of glacial endeavor, in a lonely Arctic waterway, farm from the nearest human settlement. It’s July 2009, and I’m board the Greenpeace ship Arctic sunrise, on a four-month expedition with glacialogists and climatalogists on Greenland’s glaciers – and how they’re reacting to climate change. I made some lovely images while on board, too, and here’s a blog about Fata Morgana – Mirages in Nares Strait.

Apart from a tiny weather station, there’s feck all here – yet Hans Island has spent decades at the centre of a sometimes surreal territorial dispute.

In fits and starts of childish absurdity, perhaps rivalled only by the Rockall debacle, Hans Island – all 1.3 sq km of it – became Arctic tug-of-lovechild of Canada and Denmark. The two countries – Denmark through its ruling over Greenland – somehow how ended up fighting over this tiny place, spurred on by the media and nationalist sentiments – but recent reports are suggesting that they may carve up the island for once and for all.

Canada, has, for the better part of a century, claimed Hans Island, and therefore dominion over the local geology and resources; the International Court of Justice granted it the island to Greenland in 1933, and therefore Denmark claims it. Then, in the 80s, while both nations were signing an agreement to jointly protect the marine environment in the event of any resource exploitation, a Greenland-based historian bumped into an employee from Canadian Dome Petroleum employee wearing a hat – yes, a hat, with the words “Hans Island NWT” – Northwest Territories. The story broke into Greenlandic papers – it turned out that Dome, unknown to the politicans had been working on Hans Island. Holy war broke out. Not actual war.

Apparently – the story is semi-apocryphal – for several years a back and forth spat followed, with Danish representives showing up to plant a flag and oddly, enough leaving a bottle of aquavit or cognac, both of which would be removed by a Canadian delegation some time later, and replaced by a Canadian flag and Canadian whiskey. The Danes are also said to have left a “Welcome to the Danish Island” sign for the Canadians

Zip forward to 2003-2004, when visits by both Danish and Canadian military to Hans Island resulted in more political twists and turns.Canadian defence minister, Bill Graham even visited the island in 2005, causing a diplomatic row to break out, and even a series of Google advertisements claiming the island for both nations, was disowned by the two administrations.

But in 2007, the Canadians finally admitted that the international border is halfway across the bloody 1.3-by-1.2 kilometre island. And in April 2012, National Post journalist Adrian Humphreys – said that Canada was “preparing to go halfsies on hans”. Looking at the Wikipedia entry about the island, it seems that while Humphreys has reported on Hans Island numerous times in the last decade, it’s seems that its his very articles that seem to have served to escalate the tension. No disrespect to Mr Humphreys – it seems that there’s been plenty of people out there willing to take umbrage or nationalistic stances.

His article from a few days ago quotes someone who really hits the nail on the head:

“The political complexities of making an announcement are, in many ways, much more complicated than settling the actual territorial dispute,” said Whitney Lackenbauer, associate professor of history at St. Jerome’s University.

A couple of absurdist organisations have sprouted up in response to it all – the Hans Island Liberation Front, which seems to be made up of two ‘residents’ of Hans Island, and are both called Hans.

With the North Pole under attack by the Reds, it is more important than ever that Santa Claus relocate to Hans Island. Otherwise the Soviets will take over Christmas gift delivery for the world, filling children’s stockings with old copies of Pravda, bottles of vodka, and spare parts for Ladas. Then they will remember that religion is the opiate of the masses and ban Christmas forever! Friends, we must not let this happen! The Russkie vodka must come directly to us! And as always, we need the company. We hope some of Santa’s elves are female. Even if they aren’t, just having Mrs Claus around would be nice.

“This is no time to panic” declared Hansian President for Life Stefan Simpson at his luxurious north shore retreat on a bullhorn from behind elegant walls of designer barbed wire and state of the art landmines. “There is nothing, absolutely nothing wrong that we cannot fix. The facts are simple. I – that is – you, the Hans Island population, have simply spent more than I – that is you – have brought in lately. There will now follow a short period of rigidly defined doubt and uncertainty while the hard science of economics repositions our credit rating. Now go away or I’ll shoot”.

Hans island IS actualy named after a real Hans – Greenlandic Inuit Hans Hendrik, also known as Heindrich or Suersaq. To refer to Hendrik as an explorer might do him a disservice – he travelled with numerous European and American Arctic expeditions, pulled them out of trouble numerous times. His story is too amazing to do diservice to here.

Hans Island lies in the Kennedy Channel, part of Nares Strait, the body of water that cleaves the rocky shores between Ellesmere Island and northwestern Greenland. Not many people go here – in the past it was ill-prepared explorers and Inuit. Occasionally ships go by here now – I’ve heard it said that just 30 ships have been along here since World War II. Apparently, before 1948, only five ships were said to have navigated successfully north of Kane Basin. In 2009,the Greenpeace ship Arctic Sunrise made the first known June transit into the Arctic Ocean – a month when the Strait should have been locked with ice.

What this is all about, sadly enough, is the search of oil. While Arctic nations may be starting to kiss and make up (or out?) over territorial fracas like Hans Island, the idea of anyone going to drill for oil in the High Arctic is appalling enough. Insurance giant Lloyd’s of London agree – this week the company put out a report penned by Chatham House Arctic expert Charles Emmerson, which according to The Guardian, highlights “huge potential environmental damage from oil drilling in the Arctic.”