Album cover for Dacianos: Fables for Another Time 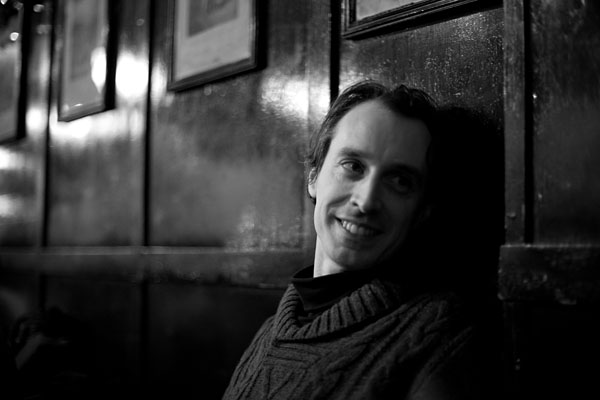 My friend, distant cousin and co-conspirator Barry Kavanagh has seen fit to use my portrait of him – made on the fly one night in Dublin’s Long Hall pub, on the cover of the new Dacianos album, Fables for Another Time. 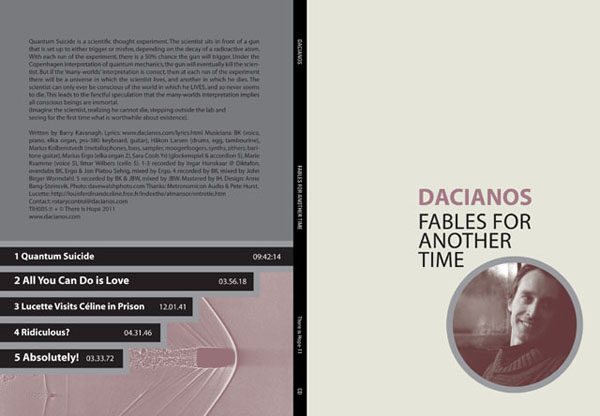 From the sleeve of Fables for Another Time

Quantum Suicide is a scientific thought experiment. The scientist sits in front of a gun that is set up to either trigger or misfire, depending on the decay of a radioactive atom. With each run of the experiment, there is a 50% chance the gun will trigger. Under the Copenhagen interpretation of quantum mechanics, the gun will eventually kill the scientist. But if the ‘many-worlds’ interpretation is correct, then at each run of the experiment there will be a universe in which the scientist lives, and another in which he dies. The scientist can only ever be conscious of the world in which he LIVES, and so never seems to die. This leads to the fanciful speculation that the many-worlds interpretation implies all conscious beings are immortal.
(Imagine the scientist, realizing he cannot die, stepping outside the lab and seeing for the first time what is worthwhile about existence).

Read more and buy the album on the Dacianos website »

The photograph of Barry stems from our furthering of an Irish stereotype – he, Damien and I were sitting in The Long Hall pub, in Dublin, Christmas 2010. Here’s a few more images from that night: