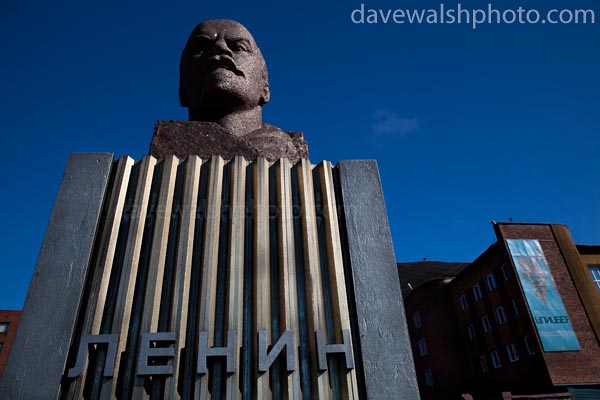 Bust of Lenin in Barentsburg, Svalbard

I am staring at a forest, a painting of a forest. A door opens in the forest, and two men climb out. They close the door, then walk away.

The forest, or rather the painting of a forest, is in the Russian coal-mining town of Barentsburg, about 1200km from the North Pole, one of three inhabited settlements in the Norwegian archipelago of Svalbard. 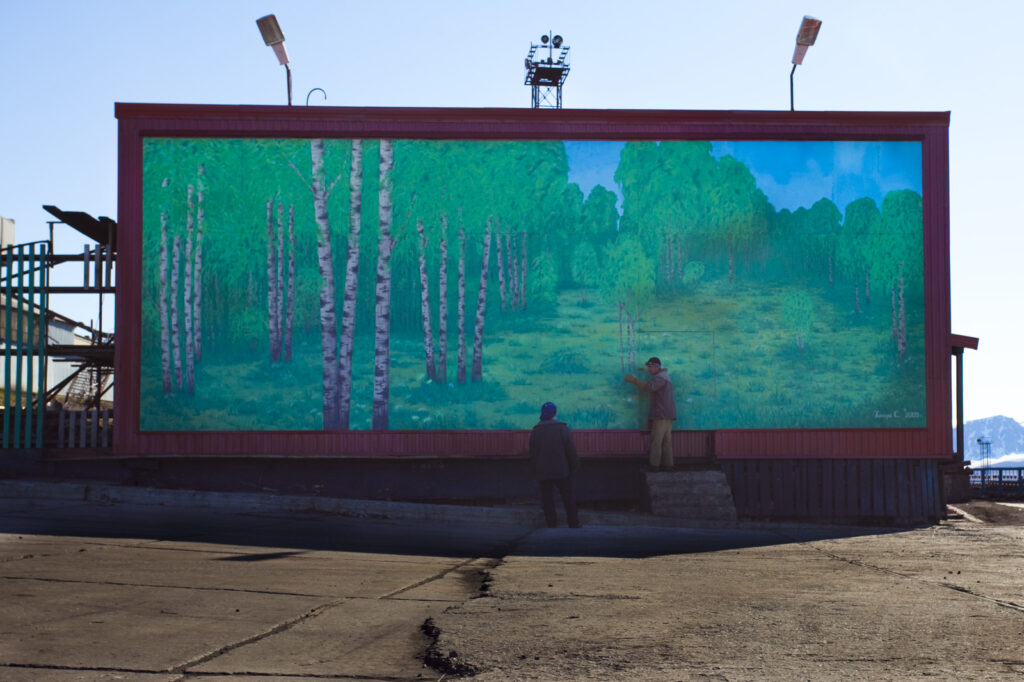 Escape? Two workmen exit a door in a mural depicting a forest in Barentsburg, a Russian coal mining town in the Norwegian Archipelego of Svalbard. Once home to about 2000 miners and their families, less than 500 people now live here. There are no trees in Svalbard.

There are no trees in Svalbard. But there are pictures of trees, billboard size, to remind the miners of the forests back home.

My visit to Barentsburg was short, far too short. I only stayed 97 minutes. I am not proud of this. I arrived as a tourist, and didn’t want to leave. At least not soon.

I took no time to make new friends, gained no valuable insights into what it is like to live there. I didn’t hit the bar, like some of the other visitors, to sample the vodka. I didn’t even buy a Putin, Yeltsin, or Gorbachev matryoshka doll.

I did see a metal sunflower, a homemade spaceship, an awful lot of kittiwakes and two men walking out of a painting of a forest.

View gallery of 97 Minutes in Barentsburg

In any case, there were not many people around to talk to, and those that passed along the pitted, concrete main street didn’t spare much attention for the summer blow-ins. Living in Svalbard means putting up with a polar night that lasts from early November until the end of January, and temperatures of -50C. Milksop daytrippers are hardly worth consideration.

In fairness, I didn’t go all the way to the Arctic for a tourism spree; I stole a day off after a two-month expedition further north. I had been the press officer on board the Greenpeace ship Esperanza, campaigning against industrial threats to the Arctic and studying marine biodiversity and the effects of CO2 pollution on our oceans through ocean acidification. The trip had taken us along the sublime coast of Svalbard, and the scientific research station at Ny Alesund.

This was my second consecutive summer in the Arctic, but not my first trip to Svalbard, the ‘Cold Edge’, a mysterious land of polar desert and ice. I fell in love with as a child, just by reading about it, this land with just 2,500 people and considerably more polar bears. Since 2009, when I arrived on a ship from Greenland, I had learned to love Svalbard more; the undomesticated, almost barren landscape, inhabited by bears, and foxes and reindeer, meets a coast of fjords and walrus and belugas. There are no roads, outside the main town of Longyearbyen. You don’t leave town without a high-powered rifle, and the know-how and the stomach to use it – and to avoid using it – if you run into a polar bear interested in eating you.

Barentsburg, named after 16th century Dutch explorer William Barentz, is home to about 500 of Svalbard’s people, mostly Russians and Ukrainians who work at Arktikugol’s coal mine, or provide services to support it. There more people, about 2000, I understand,, but the coal mine’s production and competitiveness declined over the years. An air tragedy and several mining accidents haven’t helped.

Barentsburg had appeared on the horizon every time I sailed into Longyearbyen, a puff of smoke from its power station seen against snow-covered mountains. I had seen pictures, read stories of an improbable kitsch relic of Soviet pride at the top of the World. So, with a day free, I took a daytrip on a tourist ship.

With the little ship drawing towards Barentsburg’s wharf, I view town through my telephoto lens. Boarded-up and sooty wood houses. Decrepit piles of discarded machinery equipment. On the mountainside, some words in Cyrillic. I later learn reads “peace on earth”. Not a human to be seen, until a young, tough-looking woman appears, wearing stonewashed jeans. She’s our guide, and we follow her up the 220 wooden steps to the main street – an ambling, pitted concrete artery running across the town. More boarded up houses. An industrial looking child’s swing, perhaps once belonging to the Russian ballet dancer Maya Plisetskaya. She is said to have lived in the adjacent house in the 1930s, when her father was Barentsburg‘s Head of Mines. Farther up, a massive, closed down building, with an intriguing sign saying “Cafe-Bar 78 Parallel” – referring to Barentsburg’s latitude. This clearly was the place to be on a Friday night, once upon a time.

The day is sunny, which lends some magic to the shabby colours of the buildings. Anywhere there’s soil or loose ground, it’s stained black with coal dust. When the wind kicks up, I can feel the dust in my eyes and on my skin. Three large murals on billboards, two of them showing bucolic forest scenes. A shop and museum with a hearty Soviet-style mural of miners above. Another mural, showing a miner being embraced by two polar bears, each holding a Norwegian or Russian flag. Improbable.

I slip away from our guide, who, to her credit, is incredibly proud of the place and has been pointing out landmarks in lengthy detail. She moves on, with the entourage. I fall in love with afternoon light; the run-down town square, the resolute Lenin bust, the abandoned apartments now colonized and shit-strewn by armies of squawking kittiwakes. On one of the many overcast Svalbard days, Barentsburg could be a depressing place. But today I love it. I wonder how if I’d feel the same after weeks, or months.

Some young, expressionless women in leather coats walk past. I nod a hello, but they ignore me. Some dark, hard faced men walked past. They smile, then shift attention at the young tourist women up ambling along up ahead.

There’s a tiny wooden church across the overgrown, crumbling town square. It’s in the style of Pomors, a seafaring, hunting people who came to Svalbard from Russia in the distant past. The church, I learn, is dedicated to the 141 people who died in a plane crash here in 1996 – miners and their families – and to 23 miners who died here the following years. Barentsburg may amuse me, but it has a disproportionally sad past.

I climb higher on the main street, and off it, to where a proud bust of Lenin stands, backed up a mural showing the islands of Svalbard. Across the way, modern apartment blocks, one with a huge mural of a woman in traditional clothes; in between, one of the roughest soccer pitches I have ever seen. And I’ve seen a few. I follow some tourists up some steps and into a building. Turns out to be the hotel, which also has a post office souvenir shop, selling all manner of post-Soviet tat –Russian dolls, Lenin pins. It’s thronged with my fellow travellers. I photograph the impeccably empty, clean, institutional green cloakroom, then leave, skipping the tourists vodka-sipping in the hotel bar.

Main St dips away down hill here, towards the mines. Time is slipping away. I work my way back towards the 220 steps, pausing for a closer look at the propeller-driven space-car thing overlooking the sea. I see other daytrippers draining towards the port. I try to slow time down by photograph other things – houses, murals, churches, anchors, shipping containers, cranes. I see a man welding, another climbing into an ancient red UAZ 452 Bukhanka ‘loaf’ van before I embark.

From on board, I can see the last few stragglers approach. Our guide is standing facing away from the ship, apparently gazing into space. She appears to be posing beside the giant rusting crane, then turns and admonishes the latecomers, casts us off, and throws us a wave.

I skip through the images on my camera. Between first setting foot on concrete, and returning to the ship: 97 minutes. Not long enough to truly experience any town.

Contact for me details on publishing these images, or buying prints »

3 thoughts on “97 Minutes in Barentsburg”