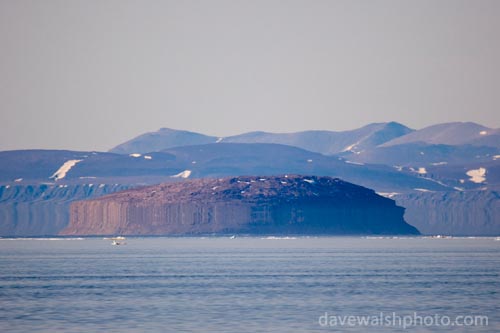 There is something unnerving about watching reality bend before one’s eyes. There is what one “knows” to be true, and that which
one can see through a telephoto lens or binoculars – with Fata Morgana, the two are difficult to reconcile. Something is happening on the
horizon. Icebergs twist and change shape, move, disappear, elongate. Islands rise from the sea. The earth warps.

The 18 images of Fata Morgana, or complex “superior” mirages, in the slideshow above were made between July and September 2009, off the coasts of both northwestern and northeastern Greenland, while I was part of a Greenpeace expedition to investigate the effects of climate change in the Arctic. Some of these photographs show the landmass of Canada’s Ellesmere Island in the distance – the air is incredibly clear in the Arctic, and the only way to capture the detail of Fata Morgana is by using a long telephoto lens – in my case, I was photographing at 400mm.

Later, back in so-called civilisation, when I mentioned that I’d been photographing mirages in the Arctic, I was given the raised-eyebrow treatment by those who expect the Arctic to be a cold, miserable, colourless place. Have a look at my gallery of images of Greenland and the Arctic to find my indisputable arguments against this.

Fata Morgana are incredibly common in the Arctic; with cold air hovering above the frozen sea water of the icepack and with 24 hour summer sunshine warming up the air, the inversions are numerous, fantastic and bizarre.

About the slideshow
In the slideshow, the 2nd image shows with an iceberg that’s growing an indistinct steeple. In image 4, Joe Island appears cylindrical, with a domed top; in fact, I’ve seen the island “as normal”, and the island naturally curves up out of the water, perfectly worn by glaciers. It’s the Fata Morgana that’s causing it have vertical sides. Image 7 shows Ellesmere Island, warped by the curving of light through the air, while number 8 is more subtle  – the narrow band of sea ice appears thicker than it really is. In image 9, look to the left of the iceberg. In 12, the iceberg is mirrored above, along with the sea ice – as a result, a long white line appears across the desert landscape of northwest Greenland. The next image takes on the appearance of a church tower,  while 14 definitely seems like a church or fairy castle, yet with a small white orb  floating above the real iceberg. That last image…. look, then look again at the top of the image. Is that ice, or….? You can view the images one by one on my main website.

About Mirages
We are all, perhaps, aware of the clichéd mirage: A man wanders in the desert, thirsty, near death. Over the next dune, an “oasis”, surrounded by palm trees appears a few hundred metres. He sprints towards it, launches himself into the pool of cool water, but finds himself wallowing in sand instead. He has fallen prey to a mirage.

While someone suffering from the madness of heat exhaustion could, however unlikely it may seem, conceivably mistake sand for water. Mirages cannot be held in one’s hand – they appear some distance away, and like rainbows can only be followed, never reached.

Mirages, from the Latin mirare, meaning “to look at, to wonder at”, are natural optical phenomena – they are real, objective events, that only cause problems for us when we interpret them incorrectly. They are formed by the bending, or refracting of light rays through layers of air of differing temperatures.

Superior mirages are formed by a temperature inversion – that is, the air at eye level is warmer than the air below, causing a false image of the real object to be seen higher than where it actually is. This can cause objects which are actually below the horizon to “appear” above it, thus giving the impression that they are closer than they really are.

Then there are Fata Morgana – an Italian term referencing Morgan le Fay, the elfin, shape-shifting half-sister of King Arthur. In our context, the Fata Morgana is a complicated, rapidly changing superior mirage,  that display inverted objects, stretched landscapes and other weirdness. They can even switch quickly between superior and inferior images.

Historical Cases
Throughout history, there have been famous cases of confoundment by mirages. In 1941, when the British cruisers Sussex and Norfolk chased the German battleship into a sea mist following the sinking of the Hood, seconds later, the ship reappeared, steaming towards the British ships, before flickering and fading away. On radar, the German vessel had always been steaming away.

Arctic explorer John Ross had his career ruined. When his expedition vessels reached Lancaster Sound to the north of Baffin Island in the early 19th century, following the exploits of William Baffin two centuries earlier, Ross saw his way blocked by a range of mountains. He named them the “Crocker Hills”, and despite the protestations of his officers, turned for home. If had proceeded, he would have entered what the fabled north west passage.

Many reported strange phenomena could potentially be explained away by mirages. Usually, tentative explanations of such events are disparaged, to the point that that the term “temperature inversion” seems to have become a byword for “we don’t know”. This is a little unfair. There are countless references in ancient texts, right up to modern day news reports of “cities in the sky” fleets of ships sailing through the sky and so forth. American writer Charles Fort, the pages of Fortean Times, the ancient of the Annals of the Four Masters, and even blather.net has covered these events.

For example, in James Hardiman’s 1843 notes to Roderick O’Flaherty’s A Description of West or H-Iar Connaught (1684), there is a  note pertaining to the appearance of “Demon Ships” in Galway Bay in 1161 A.D., which was mentioned in the Annals of the Four Masters, itself a year-by-year history of Ireland from the “earliest times” to 1616, compiled by four friars in the Abbey of Donegal in Bundrowes, on the coast near Bundoran, Co. Donegal .

“Fantastical Ships –Our annalists, in recording this occurrence, call these ships loinger demnacda. . . the meaning of demnacda, which literally signifies devilish or diabolical, from deaman (demon), the evil spirit. But our author’s phrase, “fantastical ships” (viz., visionary, or having the appearance of a phantom, not real), was happily chosen to express this instance of atmospheric refraction. The writer remembers to have seen, when a boy, a well-defined aerial phenomenon of this kind, from a rising ground near the mountain of Cruach-Patrick [a.k.a. Croagh Patrick]. It was on a serene evening in the autumn of 1798. Hundreds who also witnessed the scene believed it supernatural; but it was soon afterwards found to have been caused by the fleet of Admiral Warren, then in pursuit of a French squadron, off the west coast of Ireland.”

The Annals of the Four Masters holds other mentions of strange aerial vessels; “Ships, with their crews, were plainly seen in the sky this year.” The year? 743 A.D

Further reading: An Introduction to Mirages by Andy Young.


Liked it? Take a second to support davewalshphoto on Patreon!